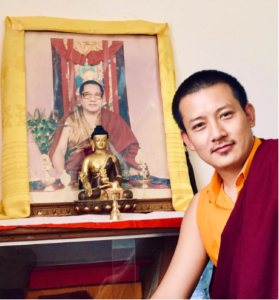 Khenpo Tashi Tseten completed his 9-year lopön degree in Buddhist philosophy and practice at the age of 25 from the Ngagyur Nyingma Institute (NNI), scoring first place in his class in each of the final three years of his study. He was awarded his khenpo degree (the equivalent of a PhD) in 2018. He is widely regarded as one of the most brilliant Nyingma scholars of his generation. He taught classes on grammar, poetry, Tibetan dynastic history, Pramana, Madhyamaka, Abhidharma, Prajnamaramita, and Vajrayana for five years at both of Namdroling’s monastic colleges for monks and nuns. Khenpo is both a poet and author and has published two books, the first describes mandala offerings and the second presents the life and major activities of his root guru, His Holiness Pema Norbu Rinpoche.

From 2013 to 2020 Khenpo Tashi has taught (almost) each year in the Rigpa Shedra (Buddhist Study College) established in Pharping, Nepal as requested by Khenchen Namdrol Rinpoche. Khenpo teaches the traditional texts of Buddhist philosophy using examples from everyday life and current events that help students internalize the most important points and bring their timeless wisdom into lived experience. 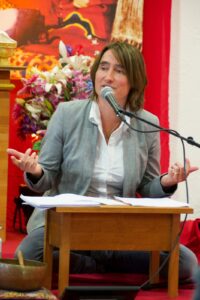 Chantal Bergers has been studying and practising within Rigpa since 2002. She has been attending the Rigpa Shedra almost every year since 2010, as a student and a review holder, and was the first Western shedra student to teach at the Rigpa Shedra.

In 2016, at the request of Khenpo Namdrol, she taught the Bodhicharyavatara, with the Nectar of Manjushri’s Speech commentary combined with several written and oral commentaries by contemporary Tibetan teachers, always striving to make it most relevant for a modern Western audience.

Apart from studying and teaching at the Rigpa shedra,  Chantal is also involved in Rigpa’s spiritual care program as an educator, and she is a senior teacher in Awareness Centered Deep Listening, a method that combines the insights and methods of contemporary Western psychology, particularly the person-centered approach of humanistic psychology, with the Tibetan Buddhist tradition of awareness, mindfulness meditation and compassion.

In her daily life, Chantal works as a medical doctor in general practices and nursing homes.

Verena was born in Rosenheim, Germany and began to study and practise Buddhism under the guidance of Sogyal Rinpoche in 2005.  Very soon she developed an interest in Buddhist Philosophy and studied for ten years at the Rigpa Shedra, Rigpa’s college for Buddhist Philosophy in Nepal under the guidance of Khenchen Namdrol.  She has held review classes in the Rigpa Shedra for a number of years, and has taught the Bodhicharyavatara at the Rigpa Shedra in 2018. Verena teaches within Rigpa in both English and German. She is a member of the Vision Board.

Christina Monson is a translator and interpretor who has been studying and practicing in Nepal under the guidance of her root master Chatral Rinpoche for over two decades.  She has studied religion and Tibetan language at both undergraduate and graduate levels in the United States and at the Rangjung Yeshe Institute of Kathmandu University in Nepal.  She has published a translation of the short life story of the great dakini Sera Khandro entitled The Excellent Path of Devotion.  A member of the Light of Berotsana Translation group, Christina translates for teachers such as Dudjom Yangsi Rinpoche Sangye Pema Sheba, and currently is translating some of the Treasure revelations of Sera Khandro.

Damien van Effenterre is a former scientist who became a student, ​translator and interpreter ​of​ Buddhist philosophy. After graduating from the Ecole Polytechnique in Paris and completing his PhD in physics from University Paris VI, Damien received a tenured position as a researcher at the French National Centre for Scientific Research (CNRS) and started to work in the field of biophysics. He started to practise meditation and follow the teachings of Sogyal Rinpoche in 1999. His growing interest for Buddhism led him to leave his scientific career in 2007 ​and pursue​ ​in-depth​ study of Tibetan language​ and Buddhist philosophy and practice,​ both at the Rigpa Shedra in Nepal and in Namdroling monastery in South India. ​

Stefan Geoffrey was born and raised in East Berlin. He studied Tibetology and Indian history at Humboldt University for four years. He also studied Tibetan for one semester in Kathmandu at Rangjung Yeshe Institute, as well as in Bir and Dharamsala in Northern India. He travelled to Tibet to immerse himself in the Tibetan language and spent nine months in Meshö near Dzongsar monastery learning the local dialect. Stefan has been the Senior Tibetan Teacher at Rigpa Shedra East since its beginnings in 2006. He has a lot of experience in teaching Tibetan language and does so with a real passion for grammar and great sense of humor.